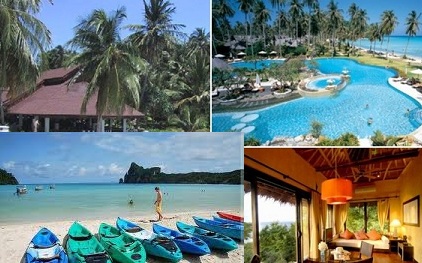 Activities and Attractions
Islands
The archipelago of Phi Phi Islands includes a total of 6 islands, with the largest Koh Phi Phi Don and Koh Phi Phi Leh are. Koh Yung Bamboo Iceland and located two small islands north of Koh Phi Phi Don. Bida Nok and Bida Noi, two large limestone formations in the south.
Phi Phi Leh
Even the neighboring uninhabited island Phi Phi Lee is worth a visit. Here is the Hollywood movie “The Beach” was filmed. The most beautiful bay is Maya Bay, which unfortunately was the movie so famous that it is already very crowded, but there are other, smaller bays which are less well attended. In addition, here is the cave swallows, or Viking cave as it is called by others. Daring Thais climb the high walls of bamboo poles to get down to the cave roof and swallows’ nests, which are later sold as expensive delicacy. In the evening you can enjoy the atmosphere of a beach restaurant and watch the sunset here. 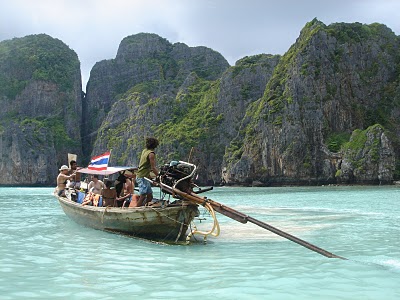 Bamboo Iceland
known locally as Koh Phai, flat and small island located a few miles north of Phi Phi Don. No one lives on the island, but the beaches are ideal for sunbathing, swimming and snorkeling.

Ko Yung
Ko Yung is north of Ko Phi Phi Don and west of Iceland Bamboo. The island has only a few small beaches that the east are mostly rocky. On the west side of fine sandy beaches are available. Above all, the snorkeling off the coast because of the colorful underwater world recommended around the island.

Bida Nok & Bida Noi
Bida Nok and Bida Noi are two small covered karst rocks next to each other in the sea south of Phi Phi Leh are. This can only be visited by boat. The area around the rock is known for its attractive underwater world.

Trekking
A hike to the Phi Phi viewpoint, do not miss any visitor. Loh Dalum Bay from a well-developed small path leads up to the 180-meter-high vantage point. The trail is easy to walk up and takes about 20 -30 minutes. The viewpoint offers a picturesque view of the interior and the coast of Phi Phi Don and Phi Phi Leh. Visitors want to enjoy walking even further, is located on the other side of the point of view other paths that lead to, inter alia, Pak Nam Beach and Rantee Beach. Thus, the interior is explored in more detail and the money for the Longtailbootsfahrt is also saved.

Diving
Around the archipelago, there are its many good dive sites with lots of colorful hard and soft corals and lots of admiring marine life. Especially the coral reef in the north around Bamboo and Koh Yung, the King Cruiser wreck, Shark Point is, Anemone Reef and Hi Deang highly recommended. The prices seem to be the same for all providers and start with something at 2,000 THB. 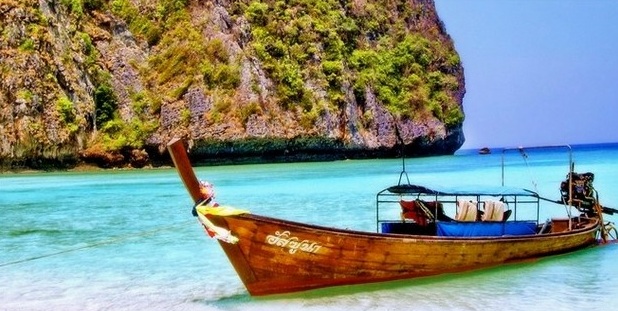 Getting there and local transport

From Bangkok to Phuket can (many flights daily) and Krabi will be flown by plane. In both cases, it goes from the airport to the pier and on to Phi Phi, the trip takes about 1.5 hours. If you want to travel by bus can also travel from Bangkok to Phuket and Krabi. From the bus terminal, it then goes on to the ferry, followed by crossing. Rail is only possible to Surat Thani and then bus to Phuket or Krabi.

Locally there is only the longtail to bring a comfortably from A to B. The prices are negotiable and can therefore vary widely. However, most of the objectives of the island are easily reached on foot.

As in much of the Andaman is the best time is between November and April. As of May begins the season, the ferries still to Phuket and Krabi, the ferry service to Ko Lanta is set, however. In general there are very few tourists will decrease violence on the ground, the hotel prices. The weather is often beautiful to the end of June, although it is raining now and then (especially afternoon) and the sky can be covered. From July to October, that happens sometimes, that it’s raining hard for several days. On some beaches is washed up in the off season the monsoon wind debris, the remains are sometimes also.

A real recommendation is therefore the months of May and June, with lots of sun and much lower prices. In addition, the beaches are less visited, guaranteeing a restful holiday.