For the tourists who have no idea what the most cool places, activities and attractions in South Korea, follows below top 10 highlights with the top ten most beautiful parts of a trip or vacation to South Korea. 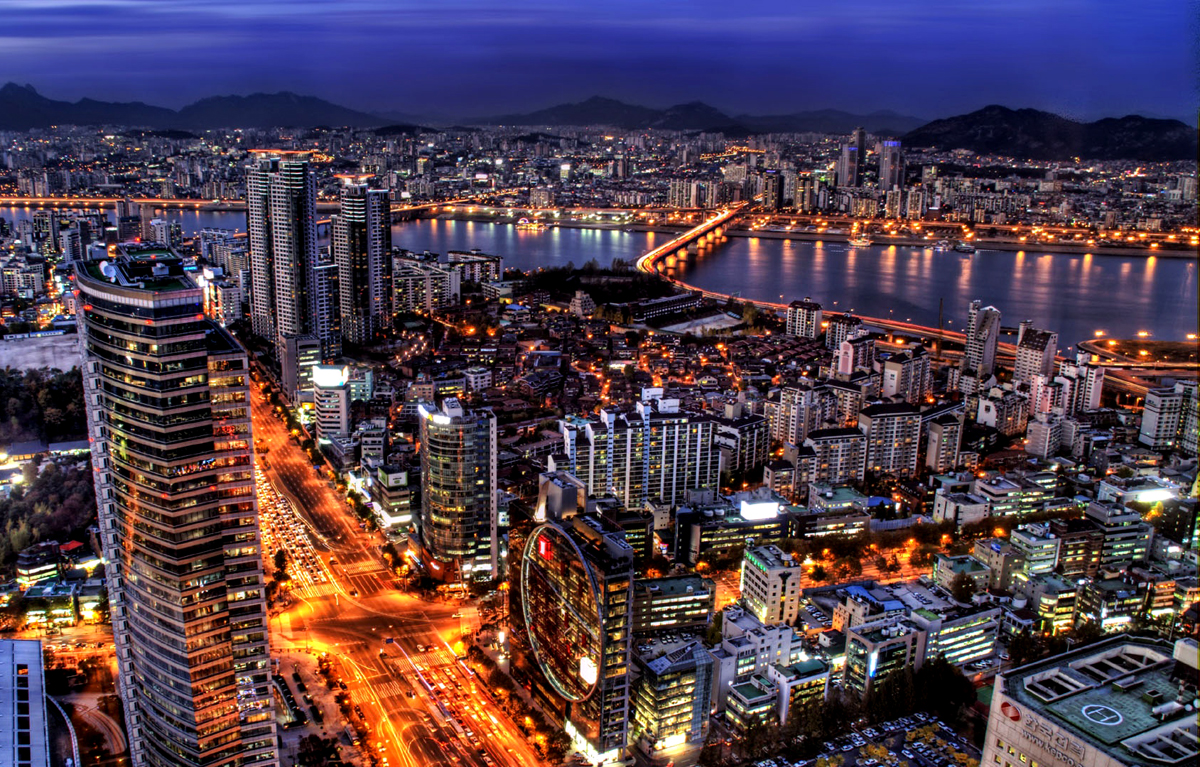 Seoul is the political, cultural, social and economic center of South Korea. The city is divided into 25 city districts. The Han River is the center of the city, on the banks of this river, the current Seoul founded over 600 years ago. With about 11 million people in an area of ​​613 km2, the Seoul city one of the most densely populated cities in the world. At present less than 48% of all South Koreans living in the Seoul region. The city is – when the inhabitants of the suburbs count – in Tokyo after the biggest city in the world with over 22 million inhabitants.

Seoul is a must-visit on a trip to South Korea, the city is standard on each tour program of the Dutch travel agencies. It is the international airport just outside the city, making a visit not to be missed. Seoul has too many beautiful sights to mention. In addition to a large number of cultural activities you can also easily days shopping in the many shopping malls in the city. The town has many good hotels, hotels in South Korea typically excel in quality and class.

The most beautiful sights in Seoul are: mountain Bukhansan and Namsan, the area around the Han River, the amusement park Lotte World, Jongno Street and Insadong Street, the Changdeokgung palace complex, the Gyeongbokkung Palace, Namsan and Sungjoon Park, the gates Namdaemun and Tongdaemun , the Yongsan market (the largest electronics market of Asia) and several famous temples, including the Jogyesa temple.

Busan with more than four million inhabitants the second largest city in Korea. The gigantic port in Busan is for container and is also an important market fish. The restaurants in and around the market serving many Korean sushi served with fresh vegetables, hot peppers and soju (traditional Korean liquor). In and around Busan you will find include beaches, luxury shopping malls, traditional markets, natural hot springs and ancient temples. Addition, you can take a cable car up a mountain to visit. An ancient defensive wall From this wall you have a beautiful view of the port city of Busan. In this defensive wall is also the Beomeosa temple, which is well worth a visit.

In the vicinity of Busan you can find the famous – and very well preserved – Haeinsa Temple where the Tripitaka Koreana is stored. The road to the temple is beautiful, you travel through one of the most beautiful mountain regions of Korea. The impressive complex is on the UNESCO World Heritage Site and is deep in one of the roughest mountain areas of Korea.

The Namdaemun Gate stands in the center of Seoul, between all the skyscrapers. Namdaemun was originally one of the eight “gates” of the city of Seoul, the city could thus be better protected from Siberian tigers. In the past, the city was protected by a large wall with a few ‘inputs’. A beautiful landmark next to the Gate is the Namdaemun Market, a huge local market where you can buy everything you can think of. Pretty much Around the Namdaemun Gate you will find several shopping malls. The Namdaemun Gate is one of the oldest and best preserved wooden structures in South Korea. This is the building called ‘National Treasure No.1.

Update: 12-02-2008: The 610 year old Namdaemun gate attraction for tourists and namesake of the central district of the city, was destroyed by fire in February 2008. The wooden structure above the stone gate was lost. The memorial service expects to build on the basis of detailed drawings were made in 2006. The gate The restoration is expected to take three years and cost more than 14 million. A 70-year-old man, according to the South Korean police announced that he has caused the famous Namdeamun port in Seoul has placed in the shaft.

A second known port in Seoul is the Tongdaemun Gate. Also this gate was built in the past to protect attacks of wild animals. The Tongdaemun Gate was then the eastern entrance to the city. Also next to this gate is a huge market, the Tongdaemun Market. Here you will find thousands of shops, something for everyone. Here also are several large shopping malls, where the emphasis is on clothing (designer brands) lies.

Cheju (Jeju) is a popular tourist destination in South Korea, it is the southernmost and largest volcanic island of Korea. The island is characterized by numerous lava caves and craters. Jeju in the past the island especially newly married couples spent their honeymoon, currently the island more and more popular with foreign tourists, although every year still many South Koreans spend their holidays. 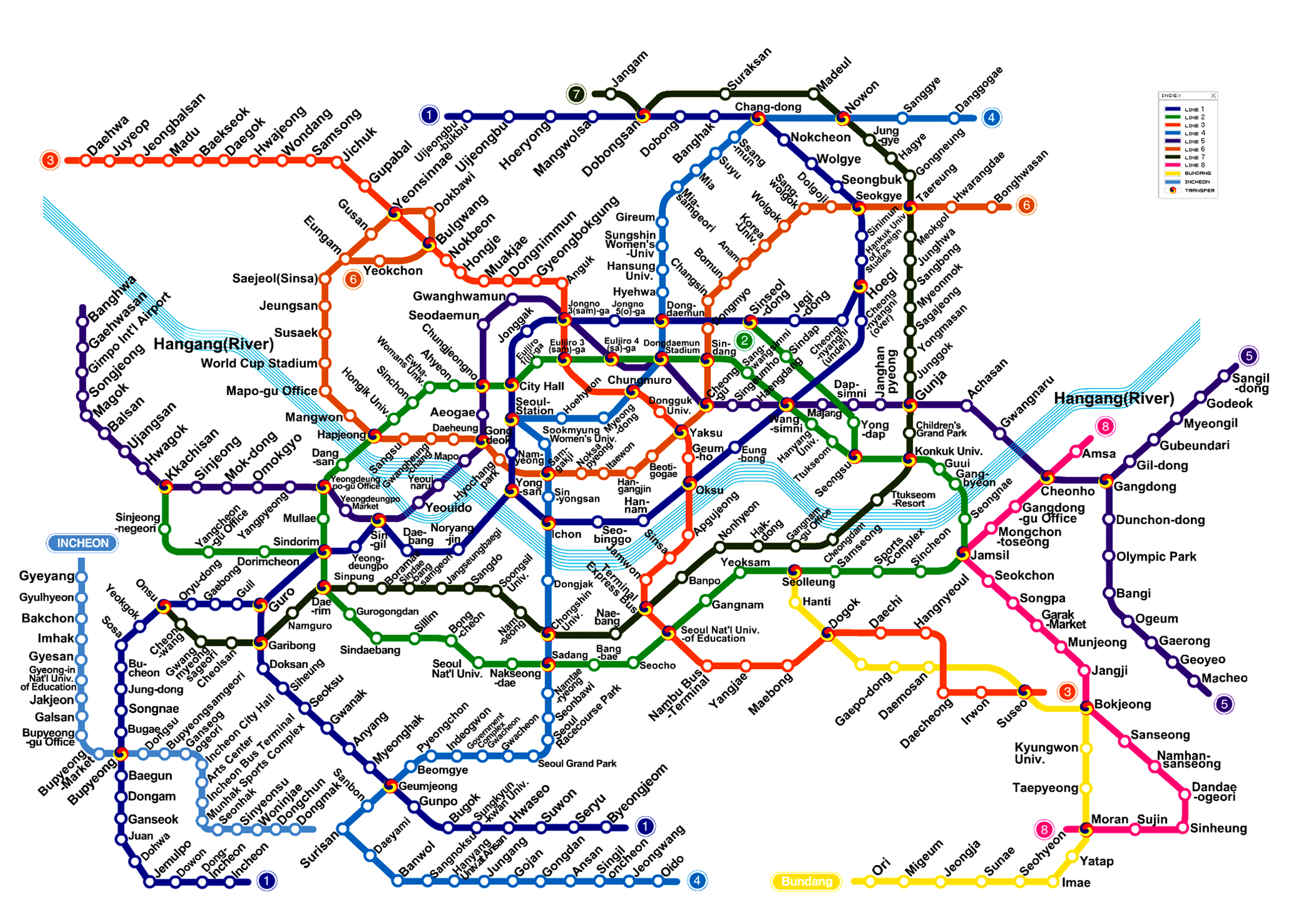 (Clik to see the Seoul Subway Map in large size)

Particularly in Cheju is not that the men, but the women earn their living by fishing. These women are also called the ‘diving women’ (Haenyeo), they gather at great depths all kinds of seafood. These women belong to the last generation: young women did not venture to this difficult career that for centuries was the main source of income.

A great activity is a visit to the volcano crater Ilchulbong. This beautiful crater you can climb on top and you can enjoy a magnificent view of the island. You can also enjoy walking in this area, the island is ideal for hiking. Around the island you can dive right in some places, plus you can also fish.

Hwasong the fort:. In central Suwon an ancient defensive wall is This impressive wall is on the World Heritage List of UNESCO. You can create a long or short walk along this wall. The fort is during the period of King Jeongjo – built (1776 1800). The fort is built on an area of ​​over 130 hectares, and contains many walls, buildings, towers, ramparts and gates.

Dadohae is a national marine park, which consists of about 100 small islands. The marine park is located in the south of the country, along the coast of the province Chollanam Do. But a few islands are inhabited, and which Heuksando Hongdo are the most famous. Heuksando is particularly worth a visit by the beautiful Choryeongmok Tree, and the beautiful road that runs in a circle around the entire island. Hongdo is known for its beautiful nature. The whole island is covered with lots of colorful plants. Especially during the spring and summer months The inhabitants of the island rely mainly of tourists. There are many little tour around the island organized, usually you explore the island than from a boat. In high season it is a fairly crowded island. Another beautiful island within the park is Dadohae Dochodo. Here you’ll find some beautiful beaches, known to many tourists. Dochodo is not touristy, you’ll find the authentic culture (without being specially made for the tourists intentionally).

The border between North and South Korea (Demilitarized Zone – DMZ) is a must-visit. Between the two countries is a strict line of 248 kilometers, you come from South Korea then you can not cross the border to North Korea (and vice versa). During the Korean War the armies of both countries at the border faced each other, this was South Korea supported by the U.S. In North Korea you read along the border on several boards violent propaganda, such as: “Our system is the best” and “Kim Il-Sung is the best” and both countries are to this day in a state of war, there is However, once a disposition that went both countries agree. From South Korea are several tour operators active, they bring tourists daily to the border. You’ll find souvenir shops, you can visit the ‘3 rd Invasion Tunnel ‘(a mile-long tunnel that North Koreans have dug deep into South Korean territory), you can visit the buildings within the zone. You may not always and everywhere take pictures, so keep an eye on the tour guide.

Chuncheon is the capital of the province of Kangwon Do (Gangwon), the city is also known as Lake City. The city attracts relatively few foreign tourists. Among the local Korean population, it is one of the most popular destinations within Korea. Especially the people of Seoul travel regularly to this city to get away ‘break’ to be. Chuncheon is just over 2 hours driving distance from Seoul. Around the city are the lakes and Soyang Uiam, which forms an excellent basis for short trips during the week or weekend Chuncheon. 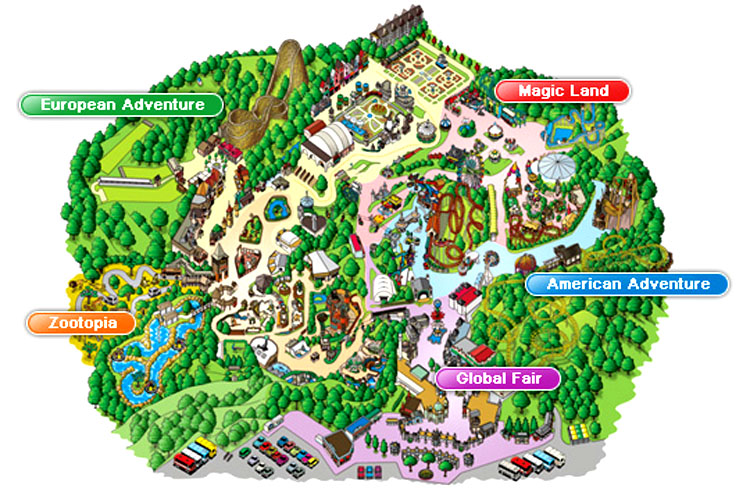 Everland is a huge theme park which is just outside Seoul to find. The park can be reached from the Incheon airport in fifteen minutes from the city of Seoul travel in up to 30 minutes to the amusement park. Everland is the Korean version of Disneyland, with various attractions for young and old. In the park, various festivities celebrated. Furthermore, you are still a zoo, a beautiful park and a water park called Caribbean Bay.