We are in Texas again! And don’t let the title deceive you. I am not going to start badmouthing about Texas. I will mention things that should be useful for visitors. Things they need to pay attention, be careful, be aware of etc. And to show a little bona fide, let me start with a sweet one. Texans (that’s how they are called, yes) are known for their hospitality and warmth. Quite possibly there will be lots of people smiling at you, waving at you, trying make a conversation, being nice and sweet etc. That doesn’t necessarily  mean they are hitting on you, or they are selling something. More likely than not, they are simply being nice and welcoming! Yet again, no harm in being careful.

Don’t turn your back on gas station food in Texas! Well, that’s what they say. Never experienced it myself, but they seem to be very sure of themselves at that. Can’t say the same thing of many other states, and that might be the reason why you also should that way, but Texas could be an exception at that. They’re promising that you’ll find WAY more than chips, soda, seeds, nuts and etc. 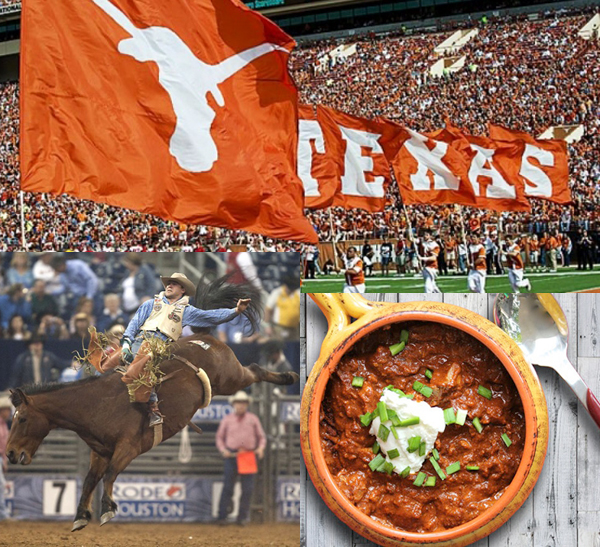 But while you’re at that, if you also need to get some soda (any carbonated drink), don’t call it a soda or a pop. Unless you need a Dr. Pepper, what you ask for is a Coke, even if you wanna buy a Mountain Dew or Ginger Ale. The generic term is Coke. Otherwise, they might still get you, but they’ll probably also know you’re not from around there. And if you are looking for (or, will cook!) Chili in Texas, keep it this in mind — NO BEANS!! Yes, Texas might be the home of Chili, but what you normally take as chili (with kidney beans) is not chili for them.

You might see rattlesnake warning signs around, especially around Amorillo, Texas. Do respect that sign, and be aware. They say the snakes won’t bother you unless you bother them, which is cool, but if you are not aware of the issue, you might accidentally bother them.

The weather in many places in Texas tend to be extremely hot and humid. Your clothes might soak wet shortly after you walk out. Make sure you take extra clothes with you — and make sure you get more than what you usually take when you go on a trip. Also, sunblock creams might be wise to have around. Talk about blocking things — well, it is legal to kill to prevent property theft. So, don’t!

Texans love their horses and cows, to the degree that they’ll take them to shopping, watching games and what have you. If you come across something like that, don’t be surprised. If you see a sign preventing people from doing that, don’t think they’re messing with you, it’s not a practical joke or something. However, if you see a Texan pulling over to McDonald’s drive thru on his/her hose, that’s fine by people most of the time.

Tornadoes are not a joke in Texas. They have the most tornadoes average per year in the USA. It is probably wise to keep and eye on the weather forecast.

Have you ever heard of Calf Fries, or Rocky Mountain Oysters? Uhmmm, well, it is considered to be a Texan delicacy. It is made from bullocks (balls of young calves). The name Hot-Dog probably strikes many foreigners  as something definitely suspicious at first sight, but people probably all over in USA know what it is, got nothing to do with dog meat or anything. But Calf Fries — well, don’t think they’ll fry a steak or something. Again, it is the balls, testicles, of a calf. Many people love it. You might as well love it, too. Just know what it is.

Alright, I will stop here now. Please leave you comments if you have more to remind us. Oh, if you are not familiar with them, try not to badmouth about Texas — they won’t like it at all. They have TOO big of a pride for their state. It might even get annoying. Just avoid unnecessary tension. Enjoy your ride in Texas.

Tags:does original texas chili have kidney beans, idiosyncrasies of texas culture people, interesting bizarre food to try in Texas, rocky mountain oysters are made from bullocks calf balls, what is calf fries made from in Texas, what should I know about texas before I visit, what to be careful about in texas