Istanbul from A to Z

Hagia Sophia, Islam and Sun… These are just a few of the words that come to mind when you think of Istanbul. The rest can be found in Istanbul this entire alphabet.

A Aya Sofia
One of the most famous buildings of the city. Hagia Sophia (which is Turkish for “Holy Wisdom”) was formerly a church, designed as an earthly reflection of paradise. After the Ottoman conquest it became a mosque and today the only building still in use as a museum.
Bazaar District B
The most colorful quarter of Istanbul. The Bazaar District taste is typically Turkish atmosphere. In the Grand Bazaar, Spice Bazaar Book Bazaar and you can go to the (overdekte!) market stalls to find anything and everything. More? Read the article The Bazaar District: where your clothes, buy kebabs and caviar.
C of Constantinople
The name of Istanbul when she was still the capital of the Roman Empire. After the fall of the empire became the name into disrepair, but the name was officially Istanbul until 1930. Earlier, at the time of the Greek domination, the city was called Byzantium.
D Dolmus
The most important (and cheapest) way of public transport in the city. A dolmus is a small van that a fixed route. The destination is on the windshield. You want to go by dolmus? Just stabbing your hand and you can enter.
E Eminönü
Want a glimpse into the ancient Constantinople, go to Eminonu. Together with the northerly district of Fatih, it contains the part of the city within the Byzantine city walls. The old wooden houses from that era have been replaced, but you can still see beautiful stone mosques and palaces.
Fort F
Here in Istanbul you have a few special copies. The Fortress Europe (Turkish: Rumeli Hisari), for example, at the narrowest point of the Bosphorus. In 1452 the fort was built in three months time by as many as 3,000 workers and now is considered one of the finest military structures in the world. 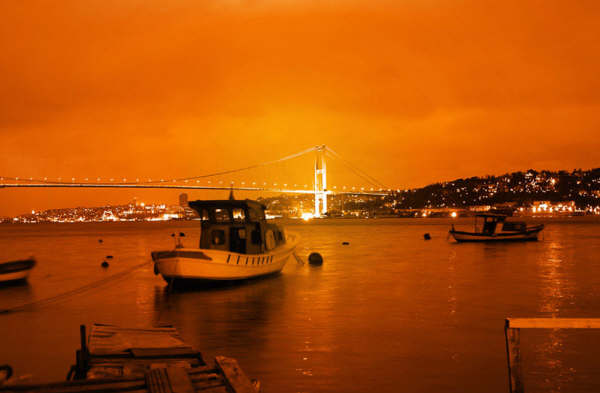 Tip! In the summer you can enjoy a nightly outdoor concert! Opposite, on the Asian shore, lies the Fort Asia (Anadolu Hisari).
G Border
Istanbul is located right on the border between Europe and Asia and is the only city in the world on two continents. The old part of town on the (smaller) half European, you must go to Istanbul for modern Asia.
H Hemingway, Ernest
The adventurous and exotic, that is what the American writer and Nobel Prize winner Ernest Hemingway so much to heart in Istanbul. In 1922 he spent some time in the city to the Turkish-Greek war to defeat. Another of his novels takes place here. Nice detail: according to Hemingway hear the Turkish cuisine to the three best in the world (alongside French and Chinese).
I Islam
Istanbul is of Islamic origin. Yet you’re also a non-Muslim entirely by the city seized. The metropolis is a special combination of eastern and western culture.
J John’s Church of Studius
The oldest church in Istanbul, which was completed by 463 (as the name suggests) Johannes van Studius. This was a Roman nobleman who served as consul under the emperor of the Byzantine Empire. Unfortunately, only the outer walls still standing, but they give you a good idea of ​​what it was must have been. Looking for this church? Then you had better call to his Turkish name: Imrahor Camii.
Children of K
Once a year children are in charge in Istanbul. That’s on April 23, Children! Forty countries each year send a child delegation to Turkey. These children are placed in host families and Children can enjoy the festivities. In the city, they may take the place of the mayor and the children sit for a split second the helm. The feast is celebrated throughout Turkey, but nowhere as great as in Istanbul.
L of Lokum
A typical Turkish delicacy, which is better known as Turkish Delight. Lokum consists of sugar, coconut, fruit, jelly and nuts and sometimes it is sickly sweet. The delicacy is available in different colors and flavors. Do not miss during your visit to Istanbul! The best can be found in Ali Muhiddin Haci Bekir in the shopping Istiklal Caddesi. 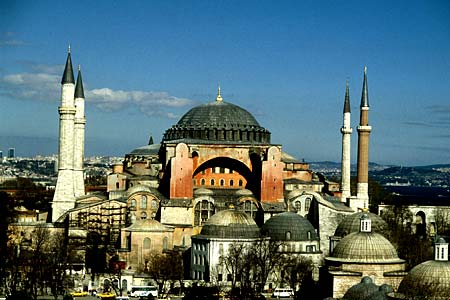 Metropolis M
Istanbul is a real metropolis with its sixteen million inhabitants live in the city as many people as in the Netherlands!
N Neve Salom Synagogue
Although Istanbul is a Muslim city, you can also find other expressions of faith. De Neve Salom Synagogue example, meaning ‘House of Peace “means. This synagogue stands in the old Jewish quarter and is the largest in the city. Besides the impressive interior, you can also find the Jewish Museum of Turkey.
O Orient Express
By train to Istanbul? Between 1883 and 1977 you did so on the Orient Express. This famous luxury train went back and forth between Paris and the Turkish metropolis. In Istanbul you can enjoy the authentic wegzwijmelen terminus of the line: Haydarpasa.
P Prince Islands
The bustle of the city do you get away on the Prince Islands. This is an archipelago consisting of nine islands which lie about 20 km from Istanbul. Once they formed a place of exile for members of the royal family. Nowadays you can enjoy nature, sandy beaches and peace and quiet: because motorized traffic is prohibited. From Istanbul to several boats.
Q Q-Club
Nightly live jazz and free admission. Sounds good? Visit the Q-Jazz Club & Bar in the Besiktas district. You have a drink at the entrance to keep for free! Elsewhere in Istanbul you can enjoy live music. At the Rock House Cafe in Ortaköy example, where on weekdays bands. Also Kahvesi in Beyoglu Hayal, a traditional rock and bluesbar is a must. With outdoor bar!
R Cruise
At a glance the difference between European and Asian Istanbul to see? Then a cruise on the Bosphorus, the river that the two parts of Istanbul and thus separates Europe and Asia. So you can also visit the beautiful buildings on the shores admire.

S Sultanahmet
You have not been in Istanbul Sultanahmet if you have not seen. You can find this mosque in the same district and is the largest and one of the major mosques of the city. A visit to this particular building is a moment of tranquility in the bustling Istanbul.
T-quarters of the Topkapi
Where the River Bosphorus and the Sea of ​​Marmara merge, you’ll find the Topkapi district. This area of ​​Istanbul is famous for the magnificent Topkapi Palace complex. The palace is open to the public, so you too can see the wealth in which Ottoman sultans have lived 400 years.
U Entertainment
Are you a party animal? Taksim certainly remember the name! This district, around the square, known as the entertainment district of the city. Here you can dance in trendy clubs, relaxing in an English pub or the cinema.
V Ferry
Istanbul is a city with water. Much water and so many bridges, which unfortunately sometimes you have to pay toll. This toll escape? Take the ferry! Not only cheaper but also quieter and more enjoyable. From the port of Eminönü departs every fifteen minutes to a drink.
W Shopping
In a real shopping, you may think not immediately Istanbul. Still find, by the presence of the many bazaars, great shopping. Would recommend: Grand Bazaar, the largest indoor market in the world. In the market stalls you can get almost anything from clothing to kebab. The Istiklal Caddesi should not be missed, this is the most famous shopping street.

Attention! In Istanbul it is customary to haggle. So go at least half are below the price which the seller calls it.

Y Yeni Mosque
As many as 66 domes that make this 18th-century mosque special. To the building have three different architects worked, making it a special mix of styles. The Yeni Mosque is also known by the nicknames New Mosque Mosque or pigeons, because on the steps of the building is often full of pigeons.
Z Sun
In Istanbul, you do it never far away: The Sun July, August and September are the months where you are with temperatures between 30 and 35 ° C most of the sunshine. But in the winter months, it never really cold: average 15 ° C.