Baobab: a tree upside down?

One of the most distinctive trees of Africa is surely the Baobab. This tree does not grow to an enormous height, but may very well expand. Strange, but not the strangest feature of the tree. Aparter still is that the branches of the tree suspiciously like roots. How? Since the Africans have their own thoughts about it. 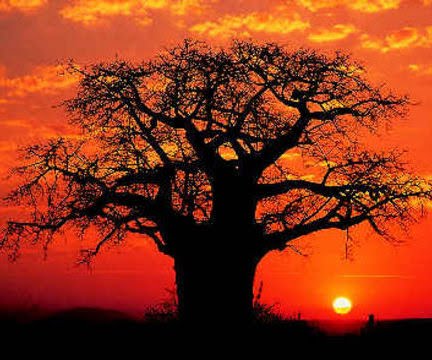 Healthy tree
Especially the fruit of the tree would be very healthy. They contain many vitamins, including Vitamin C. The amount of this vitamin in a fruit of the baobab to be similar to that of six oranges.

The leaves of the baobab are much like spinach and are also edible. They are also used as medicines for kidney and bladder problems.

Smelly Flowers
Besides leaves are at the top of the tree white flowers. People flock to the smell of the flowers often their nose, bats can not just get enough of the strong odor. In the night the tree smells the most. Then there are many bats in the vicinity of the tree to find.

Angry Gods
The Baobab tree is a very well against drought. To prevent unnecessary moisture loss, let boabob in dry periods leaves. The branches are like the roots to add more. According to an African tribe, this weird face the fault of the gods. 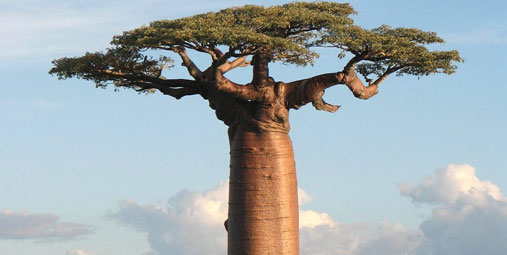 The gods would have done their best to create a beautiful tree, the boabob. The vain tree knew she was beautiful and would therefore have become very arrogant. One day all this boast to the gods of the nose. The tree a lesson, they pulled him out of the ground roots and all. Then they stopped the boom in the ground, but in his head.

The beautiful flowers of the tree die off after 24 hours. It would again be the fault of the evil spirits.

The theories are perhaps a bit unbelievable, but the mysterious Baobab sure. You can find the particular Baobab in Limpopo Province in South Africa and the South African island of Madagascar.